For a PDF version of this letter click here.

To the Attention of: Michael Kissinger
mkissinger@vancourier.com

I am writing in response to the Vancouver Courier article – ‘Suffer the Children: The Anti-Vaxx Stigma’ by Martha Perkins (May 28, 2017) (http://www.vancourier.com/news/suffer-the-children-the-anti-vaxxing-stigma-1.20241213)

Ms. Perkins quotes UBC sociology professor Dr. Richard Carpiano. Unfortunately, Dr. Carpiano is uninformed about the current state of vaccine research and makes a number of statements that are incorrect and require retraction and correction.

Dr. Carpiano makes the statement – “scientists have debunked the only study that said there was a link between vaccinations and autism”.  I assume Dr. Carpaino is referring to the so-called “Wakefield study” that was published in the Lancet in 1998.

It is clear that Dr. Carpiano has never read Dr. Wakefield’s Lancet paper and instead is simply regurgitating false statements promulgated by a captured and compliant media. If Dr. Carpiano had actually read the Lancet paper he would have discovered that Dr. Wakefield never claimed the MMR vaccine causes autism, nor was this the intention of the study. Ms. Perkins has not done her research on this matter and fact-checked statements.

The Lancet study examined the relationship between bowel disease and regressive developmental disorders. The findings of Dr. Wakefield and 12 other researchers in the Lancet paper have never been “debunked”. Their findings have been replicated by dozens of laboratories around the world and this relationship is now accepted medical science. http://pediatrics.aappublications.org/content/130/Supplement_2/S160

Dr. Wakefield’s own statement in the Lancet paper is: “We did not prove an association between measles, mumps, and rubella vaccine and the syndrome described.” Dr. Wakefield concluded that: “Further investigations are needed to examine this syndrome and its possible relation to this vaccine.”

Dr. Carpiano seems unaware of the substantial and growing body of evidence of a vaccine – autism link. To state that there is “only one study that identified a link between vaccines and autism” is to be either grossly ignorant of the body of scientific research into the vaccine-autism link, or Dr. Carpiano is being intentionally dishonest.

The body of evidence of a vaccine – autism link includes the following:

“The body of evidence on both sides is open to interpretation.
People have every right to disbelieve the studies on one side.
But it is disingenuous to pretend they do not exist.”

There is an abundance of evidence that a vaccine-autism link exists. It is dishonest and irresponsible journalism to make the statement – “scientists have debunked the only study that said there was a link between vaccinations and autism”. This is clearly a false statement that needs to be retracted.

“Facts do not cease to exist because they are ignored.”
~ Aldous Huxley

Dr. Carpiano is also misguided when he blames the “anti-vaxxers” for the return of measles, whooping cough, and polio – “easily preventable diseases, such as measles, whooping cough and polio, are making comeback because of the movement”. Dr. Carpiano seems unaware that the return of these ‘not so easily preventable diseases’ is due to vaccine failure rather than a failure to vaccinate.

Furthermore, the 2013 meeting of the Board of Scientific Counselors at the CDC revealed additional alarming data that pertussis variants (PRN-negative strains) currently circulating in Canada acquired a selective advantage to infect those who are up-to-date for their DTaP boosters, meaning that people who are up-to-date are more likely to be infected, and thus contagious, than people who are not vaccinated.

Measles: Measles research scientists have for a long time been aware of the “measles paradox.” The apparent paradox is that as measles immunization rates rise to high levels in a population, measles becomes a disease of immunized persons. Studies of measles outbreaks in Quebec, Canada attest that outbreaks of measles still happen, even when vaccination compliance is in the highest bracket (95-97% or even 99%). This is because even in high vaccine responders, vaccine-induced antibodies wane over time.  Vaccine immunity does not equal life-long immunity acquired after natural exposure. It has been documented that vaccinated persons who develop breakthrough measles are contagious.  In fact, two major measles outbreaks in 2011 (in Quebec, Canada, and in New York, NY) were re-imported by previously vaccinated individuals.

Effective Does Not Mean Safe

What Dr. Carpiano fails to acknowledge is the legitimate concern about the safety of the vaccination paradigm. A medical procedure can be effective and not safe. Thalidomide was effective for its intended purpose. It was not safe. If a product is not safe, it does not matter that it is effective. To imply that the only matter of scientific significance is the vaccine’s ability to reduce disease is deceptive and irresponsible.

When the risk of an adverse event requiring an ER visit after well-baby vaccinations is demonstrably so high, vaccination must remain a choice for parents, who may understandably be unwilling to assume this immediate risk in order to protect their children from diseases that are generally considered mild or that their children may never be exposed to.

“The committee’s review confirmed that research on immunization safety has mostly developed around studies examining potential associations between individual vaccines and single outcomes. Few studies have attempted more global assessment of entire sequence of immunizations or variations in the overall immunization schedule and categories of health outcomes, and none has squarely examined the issue of health outcomes and stakeholder concerns in quite the way that the committee was asked to do its statement of task. None has compared entirely unimmunized populations with those fully immunized for the health outcomes of concern to stakeholders.”

The current vaccine schedule has never been tested for safety in the real world way in which the schedule is implemented. No independent trials confirm the safety of giving multiple vaccinations at once. Research shows a dose-dependent association between the number of vaccines administered simultaneously and hospitalization or death. No long-term clinical evidence exists that show vaccinated children have better overall health than unvaccinated children.

The absence of scientific evidence of vaccine safety leads one to conclude that vaccination is ideology rather than evidence-based medicine.

The Myth of Herd Immunity

The theory of ‘herd immunity’ is often used to justify imposing vaccines upon citizens against their will or consent. Dr. Carpiano fails to state that herd immunity is a theory based on natural immunity created by natural exposure. Natural immunity is life long. The immune response stimulated by vaccines is temporary, lasting a few years or even as short as a few months. There is insufficient evidence that herd immunity can ever be achieved with artificial immunization.

Dr. Carpiano also seems unaware that most vaccines are not designed to reduce the spread of disease, but rather to reduce the severity of symptoms should one get the disease. Vaccines for diphtheria, pertussis, injected polio, and influenza do not prevent disease transmission. Therefore vaccination with these vaccines has no impact on the rate of infection or herd immunity. Tetanus is not contagious and therefore the rate of vaccination does not create herd immunity.

Dr. Carpiano contributes to this discrimination with the design of his survey. I wonder how the results would have been different had Dr. Carpiano added a further example – explaining that a mother had vaccinated her child only to have her child experience a severe disability as a result. The mother has chosen not to subject her other children to this risk. Feeding the discrimination through study design is irresponsible and would not be acceptable in any other social arena.

Measles is a good example of the hysteria and fear mongering promulgated by the medical industry and a captured media. Measles is a benign illness in healthy and well-nourished children. In developed countries an individual is significantly more likely to die from the measles vaccine than from contracting measles. The media-induced hysteria and fear mongering is dishonest and does a disservice to the public.

This kind of distorted and biased journalism divides a community rather than providing valuable information to help the public make decisions about vaccinations. The medical industry, with the complicit support of the media, is promoting medical tyranny rather than informed consent. 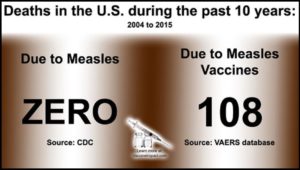 In this fear-based scenario, the questioning voice of reason is drowned out amid the hysteria surrounding the emerging ‘killer infections,’ which are such a favorite media topic.
The propagation of fear by the media and by its sources in the public health industry has resulted in a growth of power in this industry far beyond the usual checks and balances of our democracy.”
~   Dr. Philip F. Incao MD

Use of the Term – Anti-Vaxxer

The movement that is raising concerns about the safety of the current vaccine program is typically neither pro or anti vaccination. Rather this movement is characterized by a commitment to safeguarding the right of Canadians to make voluntary and informed decisions about health care, and demand independent and verifiable scientific evidence of the safety of the vaccine program. I would expect all journalists to support these efforts rather than undermine them.

Good journalism on this topic will require abandoning current practices of avoiding interviewing, understanding, and presenting critical voices out of fear that expressing any criticism amounts to presenting a “false balance” that will result in health scares.

. . . if patients have concerns, doubts, or suspicions — for example, about the safety of vaccines, this does not mean they are “anti-vaccine.

. . . approaches that label anybody and everybody who raises questions about the right headedness of current vaccine policies as “anti-vaccine” fail on several accounts.

Firstly, they fail to accurately characterize the nature of the concern. Many parents of children with developmental disorders who question the role of vaccines had their children vaccinated.

Secondly, they lump all vaccines together as if the decision about risks and benefits is the same irrespective of disease — polio, pertussis, smallpox, mumps, diphtheria, hepatitis B, influenza, varicella, HPV, Japanese encephalitis — or vaccine type — live attenuated, inactivated whole cell, split virus, high dose, low dose, adjuvanted, monovalent, polyvalent, etc. This seems about as intelligent as categorizing people into “pro-drug” and “anti-drug” camps depending on whether they have ever voiced concern over the potential side effects of any drug.

Thirdly, . . . the label (or its derogatory derivative “anti-vaxxer”) is a form of attack. It stigmatizes the mere act of even asking an open question about what is known and unknown about the safety of vaccines.

Fourthly, the label too quickly assumes that there are “two sides” to every question, and that the “two sides” are polar opposites. This “you’re either with us or against us” thinking is unfit for medicine.

Many parents who deliberate on decisions regarding their children’s health ultimately make decisions — such as to vaccinate or not vaccinate — with lingering uncertainty about whether they were right. And among those uncertainties are the known and unknown side effects that each vaccine carries.

Contrary to the suggestion — generally implicit — that vaccines are risk free (and therefore why would anyone ever resist official recommendations), the reality is that officially sanctioned written medical information on vaccines is — just like drugs — filled with information about common, uncommon, and unconfirmed but possible harms.

Medical journalists have an obligation to the truth. . . . It’s time to listen—seriously and respectfully—to patients’ concerns, not demonize them.”

We need the media to be honest brokers of medical information and work to safeguard and protect the rights and freedoms of Canadians including the right to informed consent and the charter rights to security of the person.

It is my expectation the Vancouver Courier, and any other publication that carried this article, will retract the dishonest and deceptive statements made by Dr. Carpiano and make a public correction. I look forward to your considered response.

The contents of this website are for informational purposes … END_OF_DOCUMENT_TOKEN_TO_BE_REPLACED

In 2013, I contracted the H1N1 strain of flu.  I was deathly … END_OF_DOCUMENT_TOKEN_TO_BE_REPLACED

By Shanna Mi    November 2019 It was a glorious late … END_OF_DOCUMENT_TOKEN_TO_BE_REPLACED

July 2002 Today is my daughter's sweet 16th birthday but … END_OF_DOCUMENT_TOKEN_TO_BE_REPLACED

July 17, 2020 To the attention of: Peter MacKay, Erin … END_OF_DOCUMENT_TOKEN_TO_BE_REPLACED