Vaccine Choice Canada recently updated all the provincial and territorial vaccine schedules currently received by the majority of Canadian children.  We think it’s important that parents comprehend the quantity of vaccines and neurotoxic aluminum adjuvant that is being injected into their children, as well as hefty dose of mercury preservative babies get with routine flu shots injected at 6 months, again at 7 months and every fall thereafter. Each provincial vaccine schedule is somewhat different. 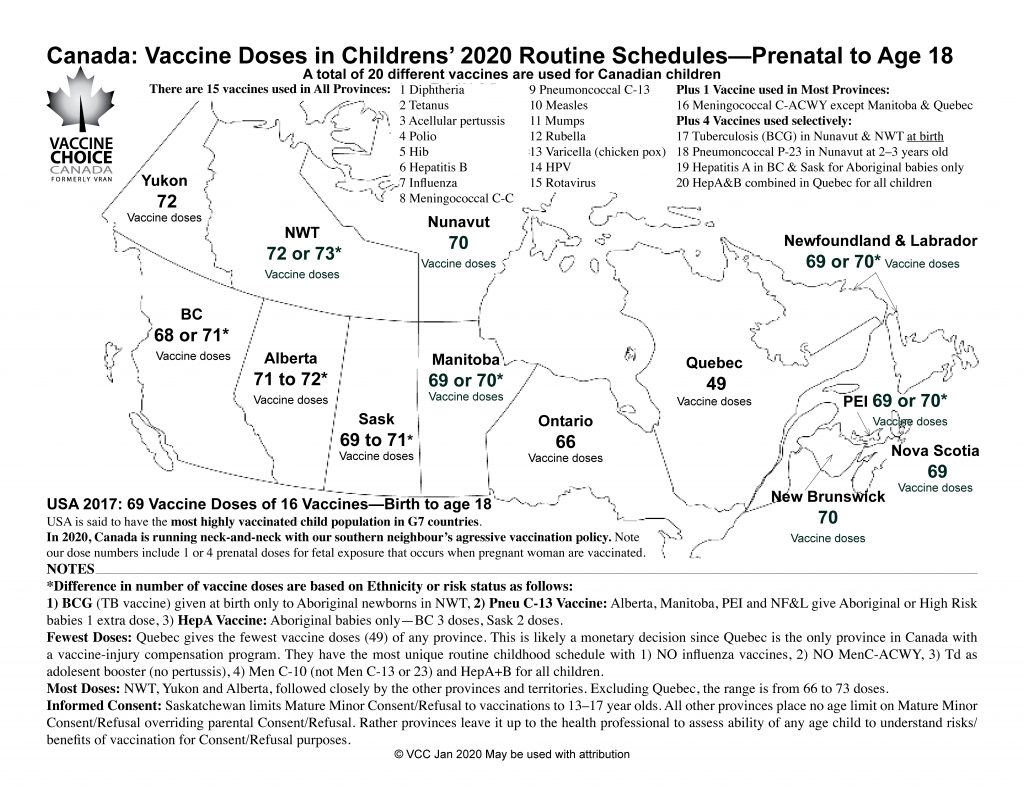 The core 5 in 1 vaccine, DTaP-IPV-Hib (diphtheria, tetanus, acellular pertussis, polio & haemophilus influenza B) or its counterpart, the 6 in 1 vaccine to which is added Hepatitis B vaccine and now given to infants in some provinces, is the foundation of the vaccine schedule. These along with the pneumococcal-13, oral rotavirus and meningococcal-C are the basic vaccines most babies receive starting at 2,4,6 and 12 months. The oral rotavirus vaccine has increased from 2 doses to 3 in all the provincial schedules across Canada. Then at 12 months, all provinces give MMR the measles, mumps rubella vaccine. Many provinces give the quadruple live virus MMRV with the added Varicella (chicken pox) vaccine, as well as an additional doses of pneumo-13 vaccine and possibly Meningoccocal-C vaccine.

No placebo controlled studies exist that compare long term health outcomes in children injected with the full bolus of these complex biochemical substances with those receiving either neutral/nonreactive placebos, or children who are not subjected to these drugs.

Depending on which province or territory, a one year old baby will be injected with up to 30 or more doses of vaccine ingredients. There are up to 20 vaccines licensed for use in children that can be included at some point in the childhood vaccine schedule. The number of variables leaves one’s head spinning.

The practice of injecting increasing numbers of vaccines at the same time has no safety science behind it. GSK, the manufacturer of Infanrix Hexa, the 6 in 1 vaccine and now part of the early childhood vaccine schedule in several Canadian provinces, was forced by an Italian court to reveal hidden documents that revealed the number of injuries and death caused by this vaccine.

Further research undertaken by Corvelva, the Italian consumer group reveals a long list of contaminants in the vaccine as well as the shocking discovery that the standard antigens which stimulate the immune system response, were not found in the vaccine.

The quantity of injected aluminum adjuvant babies are exposed to in the first year of life varies from 3835 micrograms in Prince Edward Island to 7625 mcg in the Northwest Territories. The highest quantity of vaccines and neurotoxic aluminum adjuvants are injected during the most critical phases of brain and immune system development in the first 2 years of life.  This can cause excessive immune activation and leads to varying degrees of brain injury.

This map provides an overview of the amount of aluminum adjuvants Canadian children are injected with and the regional variables. And this map shows the number of vaccine doses children are exposed to, from those given prenatally to pregnant mothers, the vaccines given at birth in some areas and those given routinely starting at 2 months to age 18.

Aluminum is scientifically acknowledged as a potent neurotoxin whose safety as an injected substance in humans has NEVER been studied. There are no human studies evaluating the safety of injecting aluminum into humans, let along tiny infants with a permeable brain blood barrier and immature kidneys. Plenty of animal research demonstrates its extreme toxicity however. All the so called “safety” studies are based on ingested aluminum, NOT injected aluminum. When swallowed as a contaminant in food or water by those with healthy and mature kidneys, the body is able to clear most of the aluminum.

However, the aluminum adjuvants that stimulate the immune system into a heightened response to the vaccine antigens are manmade, and are very different substances from the environmental aluminum we are exposed to in food, air and water.

In his article, Infants are Uniquely Vulernable to Aluminium in Vaccines, world renowned aluminum toxicity expert Christopher Exley Ph.D warns that “Infants are uniquely vulnerable to aluminium in vaccines”.

He compares the aluminum dose that is lethal to young salmon to with the amount injected into infants today. “….in the case of a single dose of Infanrix Hexa vaccine [is] approximately 8000 times higher than is required to kill a salmon parr within forty-eight hours.” Infanrix Hexa is the 6 in 1 vaccine now widely used in Europe and some provinces in Canada.

Each dose of Infanrix Hexa given at 2,4 and 6 months contains 820 micrograms of aluminum adjuvant for an accumulated dose of 2460 micrograms from this vaccine alone by the time a baby is 6 months old. Most of this cannot be cleared by the body because the aluminum particles are too large for the kidneys to clear forcing the body to stash it in various organs, including the brain.

The other basic infant vaccine (DTaIPV+Hib) given at 2,4,6 and 18 months, is Pediacel which contains 1500 micrograms of aluminum adjuvant per dose, or 6000 mcgs by the time the primary series of vaccine is injected. Professor Exley writes,

“The daily dose of aluminium in Infanrix Hexa is 100 times higher than an infant receives in breast-feeding. This is a high exposure to aluminium and inevitably results in aluminium being retained in an infant’s tissues, including the infant brain.”

He says, “This is why we must not be complacent about the use of aluminium adjuvants in vaccines. It is why there should be regulations based upon the toxicity of aluminium that govern how much aluminium is allowed in a single vaccine. This limit should be used to give clear unequivocal advice on the number of vaccines that include an aluminium adjuvant that can be given within a specified period.”

“Aluminium is ONLY toxic (as opposed to essential) in the human body and so we should always take every possible step to reduce exposure and ultimately the body burden of aluminium. Infants, due to increased gastrointestinal absorption, reduced urinary excretion and a developing blood-brain-barrier, are uniquely vulnerable to aluminium. We need to protect them from their future now.”

The contents of this website are for informational purposes … END_OF_DOCUMENT_TOKEN_TO_BE_REPLACED

by Connie Fogal July 1, 2021 I am taking the liberty … END_OF_DOCUMENT_TOKEN_TO_BE_REPLACED

In 2013, I contracted the H1N1 strain of flu.  I was deathly … END_OF_DOCUMENT_TOKEN_TO_BE_REPLACED

By Shanna Mi    November 2019 It was a glorious late … END_OF_DOCUMENT_TOKEN_TO_BE_REPLACED