You are here: Home / About Vaccines / Adverse Events / The Penta Project

In Canada there is no meaningful mechanism for complaint, investigation, acknowledgement or even legal recourse never mind justice for vaccine injury. If I’d bought a pack of gum I’d have had more consumer protection. As it was, in accepting the vaccine for my son I unwittingly accepted the risks that included death. If I had known this, I would have fled the doctor’s office.

There were over 11,000 documented adverse reactions over three years to the pediatric vaccine known as PENTA. Despite this astonishing number, Health Canada did not follow up on the affected children. How much and what kind of long-term damage followed PENTA? There was neither the political will nor seemingly the resources for such an inquiry by government.

PENTA was unlicensed, high risk. Health officials gambled on PENTA with tragic and life altering results for children and families.

Working for the Public Health Agency of Canada is a man whose job it is to redact documents. His work is accomplished by hand with strips of white tape and a keen eye. The redactor reads with deliberation then stretches thick or thin strips over numbers, names, dates, drug reactions and outcomes covering up anything he feels may be indiscrete.

And it would have taken him days to complete the pages I requested. Under the Canadian Freedom of Information Act I had asked for reports of “adverse events following immunization” (AEFI) from doctors who had injected children with a short-lived 1990s vaccine known as PENTA. But I received only a fraction of what I thought would arrive. Perhaps my request was just too big or too vague. As it was, a swath of 1,274 photocopied reports for one year and for children ages 6 months to 2 years arrived a few months later.

The batch was about 3 inches thick and wrapped in a light brown insulated envelope. The envelope had been damaged in transport and repaired by Canada Post. I cut through fat strips of tape with sober thoughts about what lay inside.

It was a frustrating and upsetting read. Pages yawned with large white spaces where outcomes and descriptions had been removed. The words ‘fully recovered’ were frequent but as there had been no follow up on these children their recoveries had to be qualified. What had life been like for them the next day, month or year following their shots of PENTA?

Yet another child experienced ‘myoclinc seizures with a recommendation to defer immunization’. One child ‘looked doped up’ and another was red and swollen from head to toe. There were raised rashes, involuntary muscle contractions, an ‘oculogyric crisis’ (rotating eyeballs) tremors, ‘abnormal crying’ ‘periods of limpness’ and numerous seizures.

Treatments for the children involved a lot of Tylenol, benedryl, ‘amox’ and other antibiotics. Several kids were hospitalized and in this small batch there were two deaths: following immunization with PENTA one child died from cerebral infarction and the other following autopsy was found to have suffered meningoencephalomyelitis, brain and spinal cord inflammation. (see reports below). 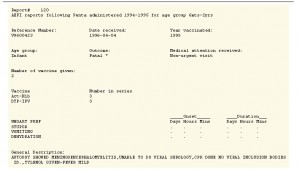 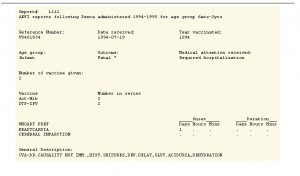 Since these 1,274 documents represented a fraction of what had been reported over the 3 years PENTA had been used, I made a second request in January 2014 for the balance of the AEFI reports. In February I received a letter from the PHAC explaining that there would be a three month delay in fulfilling my request. The reason: there were 25,000 pages representing over 11,000 adverse events following immunization with PENTA.

The request: all adverse event reports for all children in Canada who received two vaccines between 1994 and 1997 that comprised PENTA: Act-HIB (DIN 01959034) a powder and DPT Polio Adsorbed (DIN 00605050) a liquid. These two licensed vaccines were mixed to create a third vaccine known as PENTA.

The first vaccine, Act-HIB was originally a liquid containing thimerosal. This infamous mercury-based preservative would have killed the pertussis component of DPT-polio of PENTA and so it had to be changed: the Act-HIB was dried or lypholized.

Picture it: to make PENTA the doctor or nurse used a syringe to suck up and then squirt the liquid DPT- polio vaccine into the vial of powdered HIB. This vial was then shaken by hand. Shake-shake. Did they hold the vial up to the light, eye-balling the particles as they dissolved? This mixture now known as PENTA was drawn back up into the needle and injected promptly into the child. Bing, bang, boom. And yet…

PENTA did not have a license.

The government gave the nod to PENTA by amending the Act-HIB package insert to state that the two licensed vaccines could be mixed. Again, still not licensed but who would know or care?

The manufacturer was in a terrible hurry to get PENTA to a vaccine market that had just opened up wide, really wide.

In a crazy confluence of factors, the US Vaccine Injury Act of 1986 paved the way for new vaccines of greater potency with virtually no liability for manufacturers. It was an Ayn Randian type de-regulation that set the stage for immediate profits while deferring and downloading all costs of damage. The Act with its compensation program rules all but fully barred vaccine injury lawsuits at the same time as the US IOM came out with a list of ‘diseases of priority’ for which they wanted vaccines. HIB was at the top of this list despite the fact that prevalence of the disease had been dropping by 8% every year over the 10 years previous to the vaccine’s introduction….

There has never been a successful suit brought in Canada against a vaccine maker. And the Canadian pediatric schedule did and does run parallel to that of the US. So, I ask: were Canadian children guinea pigs for this product to be released into the much larger market south of the border?

PENTA was a disaster.

After three years on the market PENTA was removed from use in 1997 for ‘significant side effects’. This was something Health Canada strongly suspected before the vaccine was introduced.

In 1994 Health Canada knew that, “there is insufficient information regarding the lot-to-lot variability in immunogenicity or reactogenicity of PRP-T when given in combination with either DPT or DPT-IPV.”

Later health officials acknowledged that “Significant side effects were observed after PENTA vaccination, commonly blamed on the whole cell pertussis component. PENTA was also only about 60–80% effective against pertussis.”

For the manufacturer of PENTA it wasn’t even back to the drawing board – they had used the 3 years that PENTA was still in circulation to create a replacement vaccine. This was smart, seamless business.

For the doctors it was always business as usual.

For a growing minority of families, the strategy of increasing the potency and number of vaccines starting at birth for all infants that began at this time launched the childhood epidemics of autism, allergy, anaphylaxis and more. And for those who suggest that anecdote is not data – aside from thousands of severely redacted AEFI reports, there is no access to data nor science. This information is shielded from consumers by corporate law.

In Canada there is no meaningful mechanism for complaint, investigation, acknowledgement or even legal recourse never mind justice for vaccine injury. If I’d bought a pack of gum I’d have had more consumer protection. As it was, in accepting the vaccine for my son I unwittingly accepted the risks that included death. If I had known this, I would have fled the doctor’s office.

My son was first injected with PENTA in Nov. 1994. He reacted badly and the vaccination created allergies to foods including dairy. The dairy allergy was undiagnosed and contributed to ear infections. The doctor prescribed antibiotics for the infections followed by creams for the eczema. His allergies were mounting. The second dose of PENTA to which he again reacted was given in January 1995. More ear infections and more antibiotics followed. His respiratory system became reactive. He was diagnosed with rhinitis and asthma and given scripts for puffers and benedryl. In March 1995, he reacted violently to his third dose of PENTA at 6 months of age. After this shot he screamed inconsolably for hours, writhing in severe pain. I later learned that nurses refer to this reaction as a neuro-scream. It is caused by inflammation within the central nervous system, the brain and spinal cord.

Supported by pharmaceuticals and frequent trips to the ER, my son ‘recovered’ as the redacted PHAC documents might suggest until age one when he had a severe allergic reaction to peanut. We were handed a lifetime script for epipens.

In our progress from healthy patient to dependent medical consumer my son joined a fast growing horde of ill children that emerged as the 1990s unfolded. Society was unaware of the creeping epidemic of anaphylaxis until the kids reached the age of 5 and turned up for kindergarten. Schools across Canada, AU, the UK, the US scrambled to manage this sudden and mysterious development.

With the help of the PHAC redactor I am still piecing together the short term impact of PENTA. Long term is another matter. Penta Project is an information gathering initiative where parents of these children can share their stories.

… but I do wonder if it is too late. Should I leave the PENTA tragedy untold, give the redactor a break? No. And for the simple reason that the conditions that gave rise to PENTA still exist.

There is still no legal recourse for vaccine injury in Canada, no accountability much less acknowledgement that vaccines are inherently unsafe. In 20 years, nothing has changed for Canadian vaccine consumers except that there are more injuries according to parents – 1 in 68 children are on the autism spectrum, 1 in 33 children under 18 have life threatening allergies.

There were over 11,000 documented adverse reactions to PENTA with no follow-up by Health Canada.

PENTA was unlicensed and high risk. Did they know how dangerous it was?

The contents of this website are for informational purposes … END_OF_DOCUMENT_TOKEN_TO_BE_REPLACED

by Connie Fogal July 1, 2021 I am taking the liberty … END_OF_DOCUMENT_TOKEN_TO_BE_REPLACED

In 2013, I contracted the H1N1 strain of flu.  I was deathly … END_OF_DOCUMENT_TOKEN_TO_BE_REPLACED

Thanks to Renate Lindeman for letting us share her … END_OF_DOCUMENT_TOKEN_TO_BE_REPLACED