You are here: Home / About Vaccines / Adverse Events / MMR Vaccine and Autism – A Mother’s Journey to Heal Her Child

It’s been a long journey of education for me. When my son was born, my mom insisted vaccines could cause problems. I’d never heard of this and without any scientific evidence I dismissed it. I thought if I did everything the doctor said, my child would be healthy. I actually considered it child abuse not to vaccinate. When my son reacted badly to each vaccine, I believed the doctor on blind faith without any scientific evidence that this was “normal”. 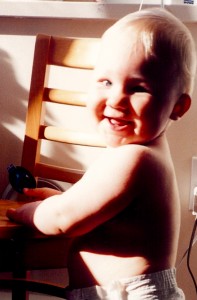 My child fell into autism directly after his 12 month MMR (measles, mumps, rubella) vaccine. Kieran was sick at the time he received the MMR shot. I told the doctor I didn’t want to vaccinate him while he was ill and he replied, “Kids are always sick, if I didn’t vaccinate SICK kids, I wouldn’t be able to vaccinate kids at all. I vaccinated all my kids and they’re fine”. Kieran had been on antibiotics for ear infections prior to and after the MMR vaccine, right up until he went off dairy and gluten at 22 months. I believe the repeated courses of antibiotics worsened his gut dysbiosis.

He was developing perfectly until his 12 month MMR. He became feverish, his body rigid, back arched, with weird high-pitched screaming for hours. He became very ill, lethargic, with burning reflux, projectile vomiting, and putrid diarrhea. He refused food, and would only drink milk. He stopped responding, refused play and hugs, and went mute. His hearing was tested at 13 months, but it was fine. He had absent seizures. At 18 months he had extensive testing at the children’s hospital to rule out everything else, and at 20 months he was given a diagnosis of autism.

My son had the typical triple-threat 3-part trigger of:

a) Genetic susceptibility. Despite having received the MMR vaccine as a young child, in 1987 at age seventeen I contracted measles from a Vancouver area friend who had just been vaccinated with MMR because of a high school measles outbreak. I myself became learning disabled (also on the autism spectrum) after contracting measles, as did another close relative.

b) Toxic overload from, among other things, multiple times above the stated “safe” levels of heavy metals (mercury and aluminum) in his baby vaccines. Also, Kieran’s dad & I had just had the first 2 of the series of 3 Hepatitis B shots 1 month and then 1 week before conception. I had the third of the series when he was a month old and breast feeding – all that extra mercury! and finally; 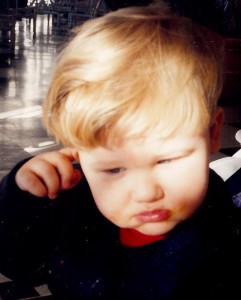 c) Three live viruses (measles, mumps, and rubella) having been directly injected into his body, bypassing the normal first defenses of his underdeveloped immune system – an immune system already crippled by toxins which had set up shop in his gut tissue because he was unable to excrete them.

At 22 months, after 3 days on a gluten/casein free diet he looked straight into my eyes and said the alphabet! He began ABA and supplementation at 24 months. Video games helped him learn to draw letters. At 30 months with an ARI trained autism specialist he began an individualized treatment plan of chelation, transdermal secretin, organic meats, and he  also went off soy and yeast. At 31 months he was saying over 200 words. At 32 months he was reading. At 33 months he was speaking in sentences. We’ve been on the Specific Carbohydrate Diet since 2008 to heal his gut. We’ve used ABA, comic strip stories, social skills groups, speech therapy, hyperbaric oxygen therapy, cranial sacral therapy, homeopathics, herbs, enzymes, probiotics and more. From 2 ½ years old to grade 7 he attended inclusive preschools & schools with a school aide. Since grade 8 he needs no school aide. 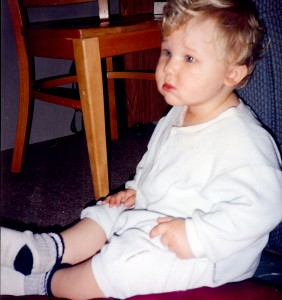 When I started to read about vaccines and realized they were injecting neurotoxins into babies I was dumbfounded for months. I could not believe that anyone would knowingly harm babies. It took a long time and much reading to wrap my head around the truth.

I’ve learned a lot since 2000, both about vaccines and about how to educate parents. I’m very worried that parents who are in the same place I was back in 1998 won’t be able to accept the entire unbelievable truth, and I would hate to know a parent chose to vaccinate a child because of a credibility issue. So I only give my personal story and referenced scientific facts. Parents must start making decisions based on facts, not rhetoric, and certainly not blind faith. There is too much at stake.

I first met Dr. Wakefield at an NVIC conference in the US in 2000. My 27 month old son had been diagnosed with autism 7 months before, and was toddling about at his feet. I approached him to ask if he would see my son. I told him he’d been having unimaginably horrible gastrointestinal (GI) problems since the day after his 12 month MMR, including burning GERD (reflux), explosive diarrhea and vomiting, and a refusal to eat anything but milk (by then soy milk), chips and black plums. He also had a grapefruit-size impaction of constipation seen on a recent x-ray. My son had been miserably sick for 15 months by then, with no end in sight. Our local Children’s Hospital GI specialist said it was “normal” for a child with autism to be so sick.

Dr. Wakefield listened compassionately, gave me the contact information to see a colleague, and then asked “Do you think the MMR caused your son’s autism? I gave a resounding YES! I was so used to doctors telling me it was just a “coincidence” that I felt a rush of hope to finally feel a doctor maybe believed me.

A little while later, one of the conference speakers asked “If you think the MMR caused your child’s autism, please stand up.” It was an amazing shock to me to see so many other parents standing up and look at each other in disbelief, suddenly realizing we weren’t alone. This wasn’t an isolated event affecting just our own child. I was stunned.

I made the decision to speak publicly about what happened to my son, in order to encourage other parents to do the research they need in order to make an informed decision about this and any other medical procedures that may carry serious risk of injury to their children.

I’ve seen Dr. Wakefield occasionally at autism conferences, and it’s fascinating to see his slides of normal and injured tissue, to be able to envision what’s been causing my son’s pain. It would have been easy for him to ignore the obvious truth, as so many others have done. But he pursued the truth, having to move away from his family, his country, and at risk of losing his very livelihood. I am so grateful to him. He is my biggest hero. 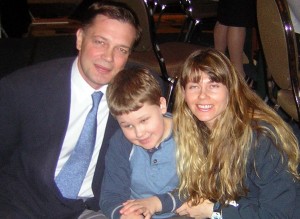 I am only one in a great sea of parents, who had been told that what happened to our child was a “coincidence”, even “normal”.  Dr. Wakefield had the decency and respect to listen to his patients, and the scientific curiosity to investigate the possibility of a link between MMR vaccine and severe bowel problems in children with autism – at great risk to himself when he suggested that the The MMR Emperor “has no clothes!”

When our beliefs about the perceived benefits and risks of the nature of our medicine and science fail us, as so often they do, from the Earth not being the center of the universe to ignoring global warming, we can’t run around shooting the messengers. We have to pick ourselves up off the floor and do what’s right, no matter the cost to our wallets and egos.

I made the mistake of leaving my son’s medical decisions to perceived experts, and my son has paid the price. We need true scientists like Dr. Wakefield to look at what really happens, and to tell us all of the information, no matter how uncomfortable or unpopular it may be, so we can make informed decisions.

In the spirit of truth,

Presentation by Cynthia at the Vaccine Summit in Vancouver on March 12, 2013 – Autism: A Vaccine Injury (18 MB PDF)

Our story has been on the media as well at the following links:

The contents of this website are for informational purposes … END_OF_DOCUMENT_TOKEN_TO_BE_REPLACED

by Connie Fogal July 1, 2021 I am taking the liberty … END_OF_DOCUMENT_TOKEN_TO_BE_REPLACED

In 2013, I contracted the H1N1 strain of flu.  I was deathly … END_OF_DOCUMENT_TOKEN_TO_BE_REPLACED

By Shanna Mi    November 2019 It was a glorious late … END_OF_DOCUMENT_TOKEN_TO_BE_REPLACED

by Connie Fogal July 1, 2021 I am taking the liberty … END_OF_DOCUMENT_TOKEN_TO_BE_REPLACED