You are here: Home / In the News / VCC Responds to Measles Hysteria

As parents of children who have been injured and killed by vaccines, we can no longer sit passively as efforts are being put forward to eliminate informed consent in British Columbia. The efforts to undermine informed consent and therapeutic choice results from the biased and distorted reporting on the perceived risks posed by those who choose not to vaccinate or who vaccinate selectively.

This letter and attachments is to inform you of the impact of current vaccine policies and practices. It is our expectation that armed with this information you will act in ways to safeguard and secure our rights and freedoms rather than erode them.

Currently all vaccines in Canada are voluntary. It is imperative they remain voluntary as vaccination is an invasive medical treatment with known unintended adverse effects including permanent disability and death. In Canada we uphold the medical ethic that “where there is risk, there must be choice”.

Any effort to make vaccinations mandatory in BC would be a violation of the Canadian Charter of Rights and Freedoms. The Charter protects us from government actions that violate our rights and freedoms including the freedom of conscience and religion and the legal right to security of the person. Mandating vaccines is a clear and serious violation of these rights and freedoms.

Mandating vaccines would also violate the medical ethic of informed consent, the Nuremberg Code, developed in response to the medical experimentation by the Nazi government in Germany, and the Universal Declaration of Bioethics and Human Rights – Article 6 – Consent, to which Canada is a signatory.

“Any preventive, diagnostic and therapeutic medical intervention is only to be carried out with the prior, free and informed consent of the person concerned, based on adequate information. The consent should, where appropriate, be expressed and may be withdrawn by the person concerned at any time and for any reason without disadvantage or prejudice.”

The medical industry ought to be able to win the argument for universal vaccination on its own merits without resorting to removing our ethical right to informed consent. The vaccine policy being actively lobbied for represents an all-out assault on the basic human right to defend our bodily integrity and the right to refuse unwanted medical treatments. It is endeavouring to make citizens compliant with a fundamental violation of our most basic liberties.

Further, Canada is the only G7 Nation without a national vaccine injury compensation program. To consider imposing vaccinations by coercion, without any fair and accessible system of compensation for vaccine injury and death, is unacceptable by any standard of a modern and ethical society.

The Measles Crisis Is Manufactured

There is no medical justification to advocate for the elimination of informed consent and basic human rights in British Columbia. The alarm around the few incidents of measles or mumps is a manufactured crisis and is not based on sound science.

The problem with measles outbreaks in British Columba is not low vaccination rates. It is the failure of public health, the public, and the media to understand how herd immunity works. Herd immunity will still result in isolated outbreaks. When there is herd immunity it simply means that the infection cannot spread in a sustained way. To treat every case of measles as a medical crisis is fear mongering and fraudulent.

Neil Rau, an infectious disease specialist, and Richard Schabas, MD, Ontario’s former Chief Medical Officer, stated in their October 2018 article in the Globe and Mail – Stop the Hysteria Over Measles Outbreaks – “The borderline hysteria fueled by the media and public health that greets a few cases is unwarranted . . . Our current levels are more than adequate to achieve herd immunity.” They also stated, “At current rates, Canada can expect to see a death from acute measles about once every hundred years or so.” 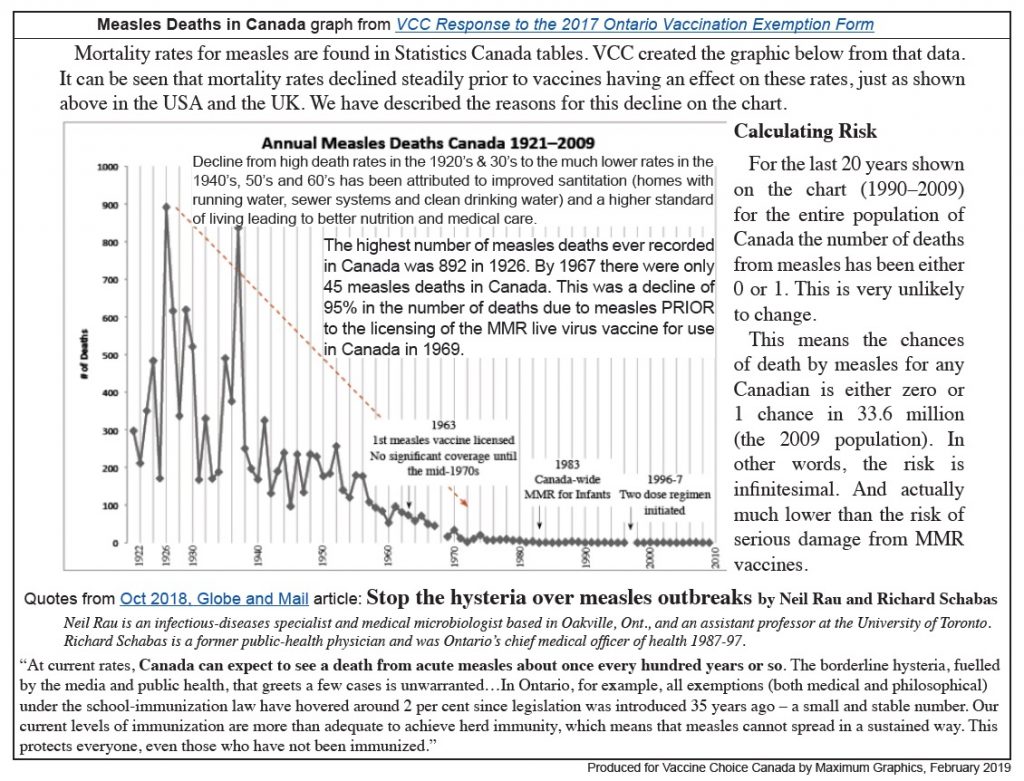 Were the measles vaccine able to provide lifelong immunity with less injury and mortality than natural exposure, its universal use might be worth considering. The scientific evidence, however, is that the risk of permanent injury and mortality is significantly higher with the measles vaccine than natural exposure to measles. A large three-year Ontario study found that following their 12 months MMR, 1 in 168 children sought emergency medical care because of serious vaccine reactions.
https://www.ncbi.nlm.nih.gov/pmc/articles/PMC3236196/?tool=pmcentrez

I repeat. In a free and moral society, where there is risk, there must be choice.

There is little value in insuring the survival of our children
if our rights and freedoms do not survive with them.

A Failing State of Children’s Health

The undisputed fact is we are experiencing “a failing state of children’s health”. This is not my opinion; rather it is the conclusion of A Report for Children First Canada – August 2018. There is an explosion of allergic/anaphylactic diseases, autoimmune diseases, mental illness, and cancers that now afflict infants and children on a scale never before seen. This is especially evident in the epidemic increase in neurological disorders including autism, learning disabilities, ADHD, and seizure disorders.

There is compelling evidence, much of it developed in the last ten years, that the injection of vaccine ingredients is contributing to the significant and permanent injury, even death of our infants and children. The level of public concern with the current vaccination practice has reached a crisis and the amount of scientific evidence of serious injury from vaccine policies and practices is now so compelling, that to continue ignoring it is morally unacceptable, even criminal, and can no longer be tolerated.

The Current Status of Vaccine Safety

The demonstrable truth is that what the vaccine industry, government regulators and mainstream media say science says about vaccine safety and effectiveness and what science actually tells us are two completely different and contradictory things. Included with this letter is information and published scientific research that reveals the current state of vaccine safety. It explains the recognized ability of vaccine ingredients to cause neurological and immunological harm.

What is painfully evident by reviewing the scientific literature is that no vaccine on the childhood vaccination schedule has undergone safety testing against a neutral placebo. This fact is documented thoroughly in the ICAN statement to HHS in the United States in the attachments. You cannot determine if a medical product is safe unless it is tested against a neutral placebo.

Needless-to-say, to accelerate the current vaccine practice by eliminating the right of parents to make informed decisions for their children, and to impose the injection of these complex biochemical ingredients with known risks of neuroimmune injuries and autoimmune disorders into healthy individuals would only add to the injuries and deaths of our children. We believe children have a right to be healthy, and that includes those who would be injured by vaccines.

The “greatest risk to humanity” is not the unvaccinated,
but failure to acknowledge the potential harmful effects of vaccination.

An indisputable principle of life is:

We await your considered response.

3. Open Letter from International Organizations to the WHO on the Issue of Vaccine Safety (September 2018)

The contents of this website are for informational purposes … END_OF_DOCUMENT_TOKEN_TO_BE_REPLACED

by Connie Fogal July 1, 2021 I am taking the liberty … END_OF_DOCUMENT_TOKEN_TO_BE_REPLACED

In 2013, I contracted the H1N1 strain of flu.  I was deathly … END_OF_DOCUMENT_TOKEN_TO_BE_REPLACED

By Shanna Mi    November 2019 It was a glorious late … END_OF_DOCUMENT_TOKEN_TO_BE_REPLACED