You are here: Home / In the News / Vaccine Safety Report 3

VCC Vaccine Safety Report 3, released in June of 2018, examines the two Canadian post-market surveillance system reports of Adverse Events Following Immunization (AEFIs) for 2016. We again find the quality and quantity of data declining. As an editorial comment we ask, “Is the decline in quality and quantity of AEFI reported data a reflection of the desire to quell public hesitancy to submit to vaccination programs?”

The Canadian Adverse Events Following Immunization Surveillance System or CAEFISS continues to show a decline in the number of AEFI reports. From 2006 to 2016 the decline is 39%. This is compounded by the fact that an unquantified amount of AEFI data was dumped into the last Quarterly Report for 2016. It covered a 4-year period and inflated the number of 2016 reports. Even though the adverse events actually occurred in 2013 through 2016, the reports were not sorted into the data for those years with a concomitant revaluation of annual data. As the fourth quarter CAEFISS report states, “the ability to compare and interpret patterns is limited,” by this data dump. 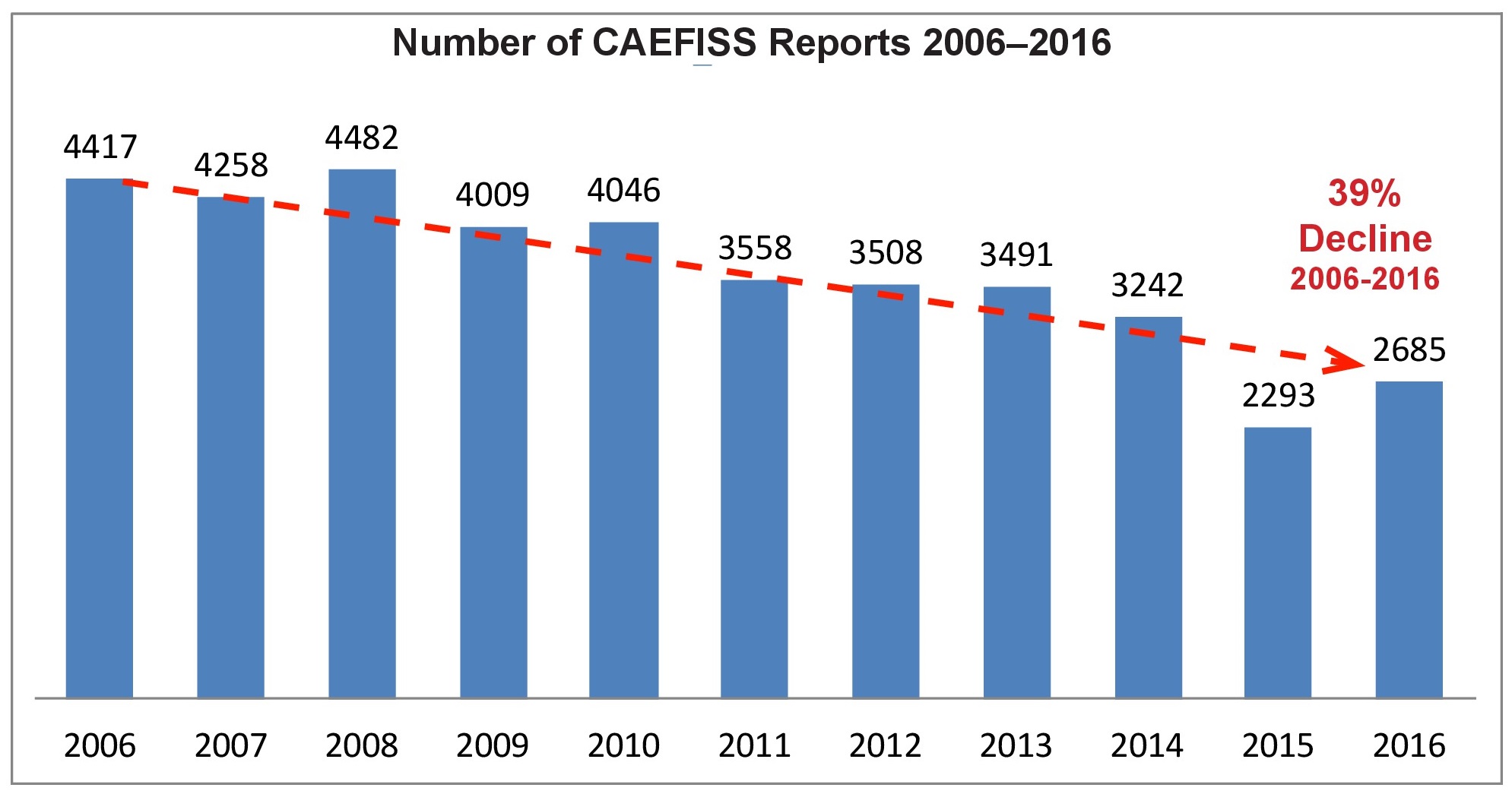 Serious adverse event reports (SAE) are those that result in Death, a Life Threatening event, Hospitalization (or Extended Hospitalization). Disability or Congenital Deformity. Children continue to experience the greatest number of Serious AEFI reports. Children up to 18 years old experienced 83% of all SAE reported in 2016. Adults experienced only 17%.

The type of adverse event reported (ie, allergic , neurologic, systemic, etc) and the suspect vaccines in each report are also tabulated in this section.

This is the database representing manufacturer submissions of AEFI reports they received in a given year. They are required by law to report all Serious Adverse Reaction reports. There was a 32% decline in the number of total AEFI reports from 2015 numbers. And an increase of 12% in SAE reports in 2016.

Influenza, Zostavax (shingles) and Pneumococcal vaccines continue to be the most reported accounting for 60% to 77% of reports in any given quarter. We estimate the number of vaccines given for each of these based on government coverage data and population data, arriving at 13 million annual Influenza vaccines, 4.2 million annual pneumococcal vaccines and 200 thousand Zostavax vaccines.

A troubling trend in the number of reports for vaccine failure is noted in the CV Vaccine Safety quarterly summaries. This prompted us to do our own searches of the on-line CV database. We found 37 reports (31%) indicating vaccine failure for Zostavax, 49 reports (50%) for pneumococcal vaccines, 9 reports (8%) for Influenza vaccines.

Pages 9–11 of the Report discuss “Why Vaccines Fail”, including the devolvement from actual clinical trials to immunogenicity studies that measure the amount of antigen serotypes produced in the blood of vaccinated persons and why these are not particularly valid markers of protection against disease. We also look at noninferiorty testing including historical references to licensing of adult and childhood pneumoccal vaccines.

Due to the high rate of vaccine failure for pneumococcal vaccines, we look at Canadian data on Invasive Pneumococcal Disease (IPD), which is what the vaccines are meant to control.

First we look at incidence rates on the Canadian Notifiable Diseases database, only to discover that rates of IPD for all ages in Canada have increased since the introduction of Pneumococcal vaccines. We also look at charts for the number of cases on the database only to discover that incidence has been reduced in the targeted age group for childhood vaccines, but increased in all other age groups, especially in seniors. We explore the international medical literature on the effectiveness of these vaccines and found that it is known (sometimes for many years) that they do not control pneumococcal pneumonia—the most common manifestation of IPD— although they may reduce other manifestations in some populations.

We then look at the IPD surveillance conducted by the Canadian National Laboratory. This information concerns the serotypes found in 88% of the 2016 cases of IPD on the Notifiable Diseases Database. We discuss serotype replacement and resurgence, both of which lead to less effectiveness of vaccination programs. Our discussion includes data from both the 2015 and 2016 National Laboratory IPD Surveillance Reports. We note that neither of these reports is available on-line, although all previous years are. You must email to request pdf copies of the most recent reports. This is one more restriction of available vaccine data for Canadian citizens.

We look at serotypes most prevalent in Canadian IPD cases as well as in European cases (26 countries included) and New Zealand cases. We also discuss vaccine-targeted serotypes (VTs) and non-vaccine targeted serotypes (NVTs) in Canada. NVTs are on the rise, which means new vaccines will be developed to combat IPD caused by them.

Finally, in the last part of this section, titled “Through the Looking Glass”, we review some more medical literature and discuss the implications of bacterial vaccination programs and their inherent limitation to control bacterial infections like IPD.

For a printable PDF of the 24-page Vaccine Safety Report 3 click here.

For a printable PDF of the 2-page Report Summary click here.

“Vaccine Choice Canada is deeply concerned that the public reporting of adverse events by both PHAC and MedEffect™ Canada are for unexplained reasons in hiatus. We appeal to you to look into this matter and explain why this hiatus has occurred as it directly affects the ability of the Canadian public to make informed decisions regarding vaccines.”

The contents of this website are for informational purposes … END_OF_DOCUMENT_TOKEN_TO_BE_REPLACED

by Connie Fogal July 1, 2021 I am taking the liberty … END_OF_DOCUMENT_TOKEN_TO_BE_REPLACED

In 2013, I contracted the H1N1 strain of flu.  I was deathly … END_OF_DOCUMENT_TOKEN_TO_BE_REPLACED

By Shanna Mi    November 2019 It was a glorious late … END_OF_DOCUMENT_TOKEN_TO_BE_REPLACED