You are here: Home / Exemptions / We have changed the conversation

9:30 am on October 29th was cold but bright as we walked up the south lawn of Queen’s Park towards a handful of people in flame red t-shirts. Excited volunteers were setting up tables, loud speakers and a podium, folding pamphlets and distributing red toques emblazoned with the words, “Rise Up.” Video cameras were there to ensure that everything that was said in front of the Ontario legislature that day would be preserved. This moment had been a long time coming.

Upwards of 500 parents, mothers with small children, fathers and grandparents – the tip of an iceberg – were there to demand medical freedom, vaccine choice. 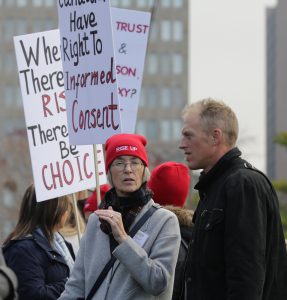 When you think about it, this fervent group actually represents the choice of millions of Canadians. According a Government of Ontario CCDR 2016 article, 19% of Canadians or 7 million are “vaccine hesitant” meaning they want vaccine choice. A 2015 Angus Reid poll suggested 40% or 14 million “don’t trust the science” behind vaccines. In other words, people prefer to do their own research and make their own decisions. In fact, I would wager that all Canadians would object to the summary removal of their right to refuse a medical procedure, if asked.

But government isn’t asking. It’s just taking. And so, on this day and on behalf of Canadians, the Rise Up contingent and VCC drew a line in the sand.

Legal counsel Rocco Galati spoke from the podium: Vaccine Choice Canada and five Moms of children enrolled in the Ontario school system, have launched a legal action against the government of Ontario challenging the constitutional validity of the Immunization of School Pupils Act. This compulsory vaccine regime interferes with the rights to freedom of conscience, belief, religion and thought.

This action has been years in the making but recent outrageous actions by government officials have shown that the time is right for it.

In September, 2019, the Toronto Board of Health informed parents that they will be vaccinating children 14 years and older without parental knowledge or consent. In Ontario, there is no legal age of consent. In NB this year, the education minister tabled legislation to withhold the right of children to attend school until they submit to injections. Witnesses from NB, from parts of Canada and even the US, came to Fredericton to testify against this draconian proposal. This legislation has been delayed but now similar legislation has just been proposed in NS. BC has a new coercive vaccine education session similar to that in Ontario.

The writing on the wall is clear. First it is the most vulnerable, the children. Then, it will be school teachers and parents – you and me, everyone. It is not hyperbole to suggest that, in the future, we may not be allowed to fly across the country unless we are vaccinated, or drive or go to the grocery store.

It is through this precedent setting action against the Ontario government that we will protect our medical freedom, our Charter right to make decisions over our physical and psychological integrity and autonomy.

It is perhaps telling that although the MSM – CBC, Global, CityTV – showed up that bright morning, they appear to have been stunned by this show of strength. A straightforward telling of the action appeared in the National Post that was shared briefly on major networks online. Subsequent spurts of weak argument have emerged but there has been no direct attack on the substance of the action.

We have changed the conversation.

Special thanks to Ramona for the photo.

The contents of this website are for informational purposes … END_OF_DOCUMENT_TOKEN_TO_BE_REPLACED

by Connie Fogal July 1, 2021 I am taking the liberty … END_OF_DOCUMENT_TOKEN_TO_BE_REPLACED

In 2013, I contracted the H1N1 strain of flu.  I was deathly … END_OF_DOCUMENT_TOKEN_TO_BE_REPLACED

Thanks to Renate Lindeman for letting us share her … END_OF_DOCUMENT_TOKEN_TO_BE_REPLACED