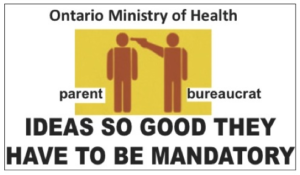 Ontario is one of only two provinces in Canada that have legislation requiring certain vaccinations for children so they can attend public or private schools. New Brunswick is the other one.

Both provinces recognize that parents who object to vaccinations must be “given relief” (a legal term) from this legislation. Therefore, both offer vaccination exemption forms.

New Brunswick, less autocratic than Ontario, simply requires “a declaration of objection to immunization signed by a parent or guardian.”  No reason is required.  A simple one-page form from the Department of Education includes the child’s information, a medical exemption to be signed by a physician and a parental objection form. The signed form is turned in at the child’s school.

An Inconvenient and Discriminatory Process

In Ontario however, the Ministry of Health has always required that parents seeking vaccination exemptions sign an affidavit (a legal document) that (1) stipulates their objection as due to religious belief or reason of conscience and (2) must be affirmed before a commissioner of oaths prior to being filed at their local public health unit.

With the new amendments to the Ontario Immunization of School Pupils Act  (ISPA)  now in force, the process of filing an exemption has become even more bureaucratic. Prior to filing an exemption form, a parent must first attend one of the dubiously named education classes at their local public health unit and receive a certificate of attendance.  Then they must sign the NEW exemption form, have it affirmed, and then return both their certificate of education and their exemption form to their local health unit.

But the Ministry of Health Had More Up Their Sleeve

Parents seeking vaccination exemptions have always complied with the bureaucracy in order to protect their children and this time was no different.  Having dutifully attended the education sessions and been handed their certificate and an exemption form to affirm, parents were outraged to discover that the new form contained a statement titled Risks of not being vaccinated that included a statement that they were accepting responsibility for putting their child’s health and even life at risk!

Furious parents crossed out this statement and attempted to turn in their exemption forms only to be informed that the form could not be altered.  One parent we know of even hired a lawyer and drew up her own exemption form, which was similarly rejected.

A 2-page data sheet that shows with the government’s own statistics that a child is far more likely to be harmed by vaccines than by the diseases vaccines may protect against.

Parents continue to contact us as these heavy handed policies play out and ask the questions:  “How can they do this?, Why can’t I cross out the risk statement?”

And we can only continue to explain that according to the Regulations written to enforce the new amendments to the ISPA, this form is prescribed by law to be the exemption form. Regulation 325/17, Section 1, Item 2 states:

It does not matter to our parliamentary lawmakers what the form says.  They never even saw it.  It doesn’t matter if it is true.  It is prescribed.  The content of the form was decided behind doors closed to the public at the Ministry of Health.  You may rest assured that the ‘stakeholders’—representatives of vaccine makers and medical professional associations (essentially lobby groups)—and public health bureaucrats were present.  The families whose lives this impacts were denied a voice.

Has the Ministry of Health Finally Overstepped?

Parents we speak to say the new amendments, their regulation, their implementation and the ISPA itself need to be challenged in the courts. They say this encroachment on our right to informed consent and our civil liberty to refuse vaccinations must be stopped.

We say please join Vaccine Choice Canada, learn about our many activities and donate to support them. Our response to Ministry of Health tactics has only just begun!

The contents of this website are for informational purposes … END_OF_DOCUMENT_TOKEN_TO_BE_REPLACED

In 2013, I contracted the H1N1 strain of flu.  I was deathly … END_OF_DOCUMENT_TOKEN_TO_BE_REPLACED

By Shanna Mi    November 2019 It was a glorious late … END_OF_DOCUMENT_TOKEN_TO_BE_REPLACED

July 2002 Today is my daughter's sweet 16th birthday but … END_OF_DOCUMENT_TOKEN_TO_BE_REPLACED

Did you miss last week's (April 19)  News Nuggets?  You can … END_OF_DOCUMENT_TOKEN_TO_BE_REPLACED