On Oct 29th, Vaccine Choice Canada (VCC), the organization which has served as a voice and haven for the vaccine injured, announced it had taken legal action against the government of Ontario, alongside five mothers with children in the Ontario school system. This lawsuit contends the Immunization of School Pupils Act of Ontario, along with Ontario’s compulsory vaccine schedule, requirement for sworn affidavits for exemptions and compulsory “education” classes are in violation of Canadian Charter rights.

On Del Bigtree’s show: The Highwire Taking Shots, How The Brave Fight Back, stalwart titan of constitutional law, Rocco Galati, elaborated on the deeply entrenched rights in the Canadian Charter of Rights and Freedoms and cited Supreme Court precedents in support of the following:

#1. Freedom of Conscience, Belief, Expression (section 2 (a) and (b) of The Charter)

#2. Right to Life, Liberty and Security of the Person (section 7)

#3. A child’s right to Education (section 7 and international law)

Rocco Galati further elucidates, “Our Supreme Court in Canada determined that no one can be forced to take any medical treatment without informed consent.” 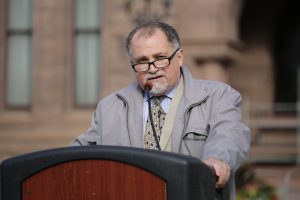 As one steps back and beholds the larger picture, what comes into focus are the Pharmaceutical Behemoths and their tentacles which have permeated every aspect of government, the established media and medical arms of US and Canada. Superficially, vaccinations are a topic under the purview of science, but in reality, the “science” is industry-funded pseudo-science to serve corporate interests. In his cogent letter, Robert Kennedy Junior attests to this by drawing an odious picture of regulatory agencies, as captured agencies which serve the interests of their corporate benefactors.

The multiple layers of scientific fraud in industry funded and government approved safety studies, are outlined in ICAN’s detailed letter to Health and Human Services, which represents 55 organizations and 5 million Americans.  As one navigates the intricate minutiae of the scientific fraud employed to mandate mass vaccinations on children in the US and Canada, the resounding, seismic conclusion is that only in an inverted totalitarian state can such chicanery exist.

The marching drum cacophony of the corporate profiteers zealously echoes throughout the Canadian landscape, as the corporate underlings residing in Canadian provincial governments, the press and medical establishments sound the alarm for the rising threat of “vaccine hesitancy.” This alarm, we are told, is for our protection, not to service the interests of Medical-industrial complex who annually garner billions in profits. The same companies which, as illuminated by Robert Kennedy Jr., have paid out over $35 billion in fraud and damages, including the recent opioid catastrophe.

“Babies have the capacity to produce up to one billion antibodies. As such, it is estimated that (theoretically) an average baby could handle up to 10,000 vaccines at one time without concern.”

This is an example of the pernicious thinking that permeates official vaccine discourse, in the real world, even excess of oxygen or water can be toxic, but in the ersatz realm of vaccines, 10,000 shots given to a baby are innocuous.

Most Americans and Canadians are unaware that vaccines are categorized as biologics, and are therefore not subject to the same pre-licensure safety standards (double-blind randomized controlled trials (RCT), true placebo) applied to all other pharmaceutical products. Vaccine recipients are only monitored for days/weeks as opposed to the gold standard length of trials for pharmaceutical licensure which often span years. Therefore, the collection of adverse events continues through “surveillance” as it is rolled out en masse to the population.

Every vaccinee is a human test subject in a trial.

The Nuremberg Code states, article 1: “The voluntary consent of the human subject is absolutely essential.”

“For consent to treatment to be considered valid, it must be an “informed” consent. The patient must have been given an adequate explanation about the nature of the proposed investigation or treatment and its anticipated outcome as well as the significant risks involved and alternatives available. The information must be such as will allow the patient to reach an informed decision.”

No treatment without consent

11 (1) The following are the elements required for consent to treatment:

In Ontario, the solution to vaccine hesitancy, proposed by the Toronto Board of Health, is to remove philosophical and religious exemptions, in addition to implementing a control grid referred to as a vaccine registry, advocating censorship in social media, to hammer the nails and seal the coffin, burying our constitutional rights, parental rights and bodily autonomy. In lockstep, after Sanofi Pasteur announced the construction of a new $432 million factory in Toronto, with millions in subsidies from the Canadian federal and provincial governments.

The Toronto Board of Health ardently wishes to cement medical fascism, willfully ignoring the root causes of vaccine hesitancy: a lack of informed consent, and lack of RCT double-blind placebo trials for each vaccine and combinations in the mandates. As well as, insufficient investigation into the grave short-term and long-term side effects from mass vaccination mandates. Also, the seldom acknowledged studies into the many failures (as amply documented in independent peer review literature) of artificial herd immunity.

In the US and Canada, there is an epidemic of chronic illnesses amongst children, including allergies, auto-immune and neurodevelopmental disorders, all subsidiary to the burgeoning cancer epidemic that has exploded in the general population. Why is there no alarm over this picture of a chronically ill population? Why is this accepted as “the new normal?” Why are most of these diseases also listed on the adverse reactions in the vaccine monographs, with the oft-cited statement that this product is not tested for mutagenicity?

During the interview with Del Bigtree, Rocco Galati cites his victorious Baker case (1999).   “Canada is the only western country, [where] any international treaty rights must be incorporated into Canadian domestic law; court said any treaty right is a minimal constitutional protection and standard.” In other words, the standards in the Nuremberg code are not mere guidelines in Canada, they are actionable constitutional guarantees.

Del also interviewed, Edda West, President of Vaccine Choice Canada and veteran activist. Edda exposes the oppressive climate in Ontario, emphasizing how the Ontario government, “Overstepped its bounds, continues to violate our rights to informed consent, continues to threaten children with suspension from school if paperwork isn’t in place, continues to refuse to give people information that exemptions are available.”

Edda West, VCC, the 5 brave mothers and Rocco Galati are the vanguards of medical freedom, poised to fight, as Del correctly proclaimed, “Setting a precedent for the world. Rocco is fighting for the world right now!” They are fighting for our sacrosanct Charter rights and the health of Canadians, especially Canadian children. A call for justice in a leviathan of social media and Google censorship, fear mongering hysteria in the press, and the stranglehold of medical and governmental bodies which refuse to alter their dictatorial stance.

Every day, vaccinal fascism is ramping up, and the de facto human experimentation studies continue. Said Rocco, of his father who refused service in Mussolini’s army,

“He always told me the fascists don’t come marching in overnight. It’s a slow march.”

Thanks to Ramona for the photo of Rocco Galati at the podium.

By joining Vaccine Choice Canada, you receive our internationally acclaimed newsletter twice a year as well as privileged access to our newsletter archive.

The contents of this website are for informational purposes … END_OF_DOCUMENT_TOKEN_TO_BE_REPLACED

By Shanna Mi    November 2019 It was a glorious late … END_OF_DOCUMENT_TOKEN_TO_BE_REPLACED

July 2002 Today is my daughter's sweet 16th birthday but … END_OF_DOCUMENT_TOKEN_TO_BE_REPLACED

2019 (10th annual) Day of Remembrance for those damaged, … END_OF_DOCUMENT_TOKEN_TO_BE_REPLACED

Given the fear surrounding the ‘novel’ coronavirus, there is … END_OF_DOCUMENT_TOKEN_TO_BE_REPLACED