You are here: Home / Exemptions / Rise Up

It was an historic day. The voices of mothers, fathers, grandparents, siblings and advocates joined as one to declare that we will no longer be bullied, intimidated, coerced, denied, dismissed or demeaned by our government, the mainstream media, or the medical profession. 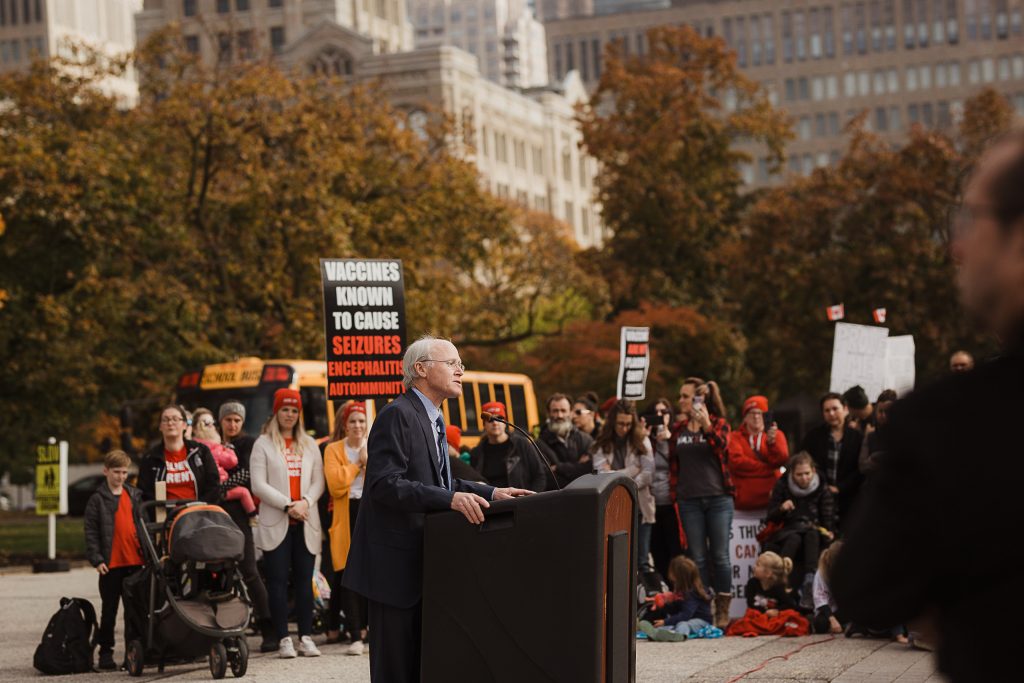 Families finally declared with one voice – It is time for this violation to end.

I was nourished and buoyed by the many hundreds of families who recognized the importance of the day and who raised their voices and loudly declared an end to medical tyranny. In my comments at Quaker House I remarked how this felt like a “family”. I felt accepted, loved, welcomed, protected and cherished. In many ways the support I received was even richer than that offered by many of my own family and friends who remain fully captured by the narrative of vaccine safety, effectiveness and necessity.

I was also invigorated and inspired by the words of Rocco Galati, our legal counsel in this matter. Mr. Galati is an accomplished constitutional lawyer, having won the respect of his friends and foes alike for his skillful and tenacious defence of our rights and freedoms in Canada. Mr. Galati is also a fellow parent who too has experienced the ravages of vaccine injury and the tyranny of this unsafe medical practice. For Mr. Galati, this battle is more than professional; it is personal. Galati speaks with authority and clarity, but also with the anger and indignation that comes from experiencing the wounding that vaccines are doing to our children. My confidence in our lawyer was bolstered by his words and conviction.

What is clear to me is that this is a significant moment in the history of humanity. This is the moment that we rise up and affirm our rights and freedoms as sovereign being or we lose them. The forces of tyranny disguised as advocates of science, medicine and compassion have captured our governments, our regulatory agencies, our media, and many of our fellow citizens.

What I find disheartening is that we have been down this path before. We have seen the destruction caused by tyranny in Nazi Germany, in communism, in dictatorships, and in well-meaning but genocidal actions such as the eugenics movement and the forced residential schooling of our First Nations people. Yet, in spite of these recent examples of the destructive power of dogma, we are once again on the brink of losing our rights and freedoms and giving away our power to those we perceive as having authority.

It is time to reclaim our power and our authority.

A parent shouldn’t have to defend their right to say no to unwanted medical products.

A parent shouldn’t be deprived of their right to make medical decisions for their children .

A parent shouldn’t have to choose between their values and their child’s education.

A parent shouldn’t have their dedication and commitment to the health and well-being of their children questioned.

A parent shouldn’t fear that their best wisdom will result in being criminally charged with endangering the life of their child.

A parent shouldn’t have to hold his son’s ashes in his hand.

I perceive this growing mistrust in the pharmaceutical industry and in government as a sign of health, maturity, and increasing autonomy.

More and more citizens are waking up to this fact and daring to question what they have been told by this industry.

And more and more families are recognizing that when a government imposes medical products by coercion, they violate the legal and ethical right of informed consent.

More and more families are recognizing that it is time for this violation to end.

Any Change Is Up To Us

If there is to be change, it is up to us.

It is up to us to protect our children.

It is up to us to restore our rights and freedoms.

It is up to us to fight for medical freedom, liberty, accountability and sovereignty.

We are the new defenders of freedom.

We are the new freedom keepers.

This journey forward to a free and moral society begins with us.

We are the change that needs to happen; we are the ones we’ve been waiting for!

Special thanks to Sonia V Photography for the photo.

The contents of this website are for informational purposes … END_OF_DOCUMENT_TOKEN_TO_BE_REPLACED

by Connie Fogal July 1, 2021 I am taking the liberty … END_OF_DOCUMENT_TOKEN_TO_BE_REPLACED

In 2013, I contracted the H1N1 strain of flu.  I was deathly … END_OF_DOCUMENT_TOKEN_TO_BE_REPLACED

Thanks to Renate Lindeman for letting us share her … END_OF_DOCUMENT_TOKEN_TO_BE_REPLACED