The National Advisory Committee on Immunization (NACI) is the body of sixteen industry professionals charged with making vaccine recommendations for “the use of vaccines currently or newly approved for use in humans in Canada”.

Of interest is that, as of June 2017, all nine voting members of the NACI had declared direct/indirect financial or intellectual conflicts of interest1 within the regulated market including with the following vaccine manufacturers: Alnylam, Astellas, GlaxoSmithKline, Grifols Canada, Hoffmann-La Roche, Novartis, Merck, Sanofi-Pasteur and Wyeth. These conflicts range from consultant fees to research grants to industry-funded education programs to lobbying. The non-voting Chair of the Committee also had declared indirect financial and intellectual conflicts of interest. The six non-voting liaison members of the committee represent the US government CDC (which holds vaccine patents), four health professional trade associations and the Canadian College of Family Physicians, all five of whom advocate with government on behalf of their members (ie, lobbying). One liaison representative declared a research grant from Abbott Pharmaceuticals.

The Public Health Agency of Canada (PHAC) publishes the NACI recommendations in the Canadian Immunization Guide. The recommendations include a routine schedule for childhood vaccinations. However the planning, funding and delivery of vaccine programs are the responsibility of the individual provinces and territories. Therefore, although their vaccine schedules are based on NACI recommendations, they vary from one region to another depending on epidemiological and financial considerations.

In many provinces and territories vaccines are administered through Public Health only. In some provinces, physicians and pharmacists also administer publicly funded vaccines. Public health nurses administer school vaccine programs in all regions. 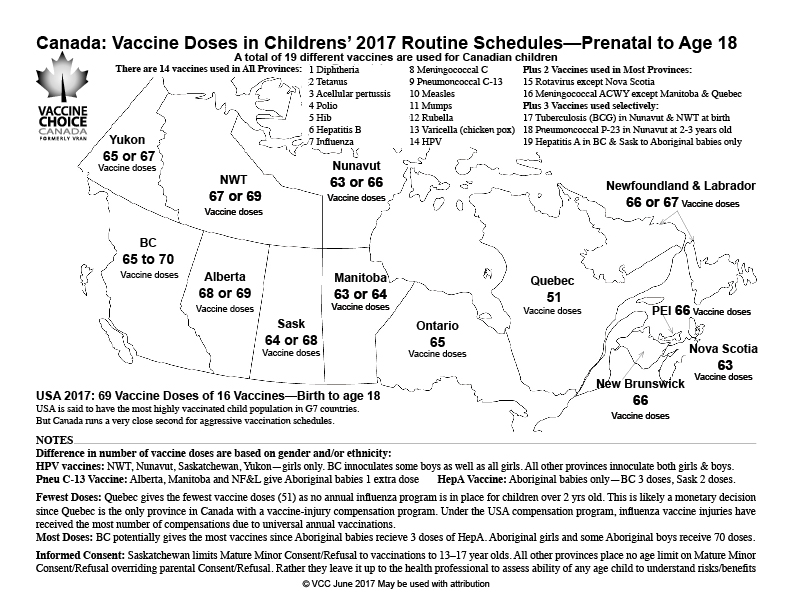 Link to PDF of Map

As you can see from the map, a total of 19 different vaccines are used for Canadian children. Most regions use 16 different vaccines all of which are on the recommended NACI schedule. Four regions use three vaccines—BCG for Tuberculosis, a 23-valent pneumococcal vaccine and a Hepatitis A vaccine—that are not listed in the PHAC routine childhood vaccine schedule for children.

The number of doses of these 19 vaccines for children also varies by region, from a low of 51 doses in Quebec to high of 70 doses in British Columbia.

How to count the number of vaccine doses your child receives

While most public health literature refers to having “one shot”, in fact there can be as many as 6 vaccines in that one shot since some vaccines are combination vaccines. As the number of vaccines licensed for use in Canada continues to mount, especially for infants, babies and toddlers, vaccines have been combined for “ease of administration”. This “ease” refers to not only the number of visits a parent must make for vaccine administration, but also to the number of limbs available to receive the vaccinations.

The two most notable combination vaccines are the various DTaP vaccines and the MMR or MMRV vaccines. The DTaP vaccines combine 3 vaccines—diphtheria, tetanus, acellular pertussis (for whooping cough)— and then, variously, up to 3 more vaccines—polio (IPV), Hib and Hepatitis B. The MMR vaccine contains 3 vaccines—measles, mumps and rubella. The MMRV contains 4 vaccines— measles, mumps, rubella and varicella (chickenpox).

At an infant’s 2-month “well baby” appointment, most regions give DTaP-IPV-Hib (5 vaccine combination), Pneumococcal-13 (1 vaccine) and Rotavirus (1 vaccine in an oral dose). Therefore your baby will receive a total of 7 vaccines in 2 injections and one oral dose. Meningococcal-C-13 is often added to the above vaccines at the 4-month visit. So in that visit, your baby will receive 8 vaccines. The total doses received are now 15 doses by 4 months of age. At the 6-month visit, your baby will likely receive a third dose of DTaP-IPV-Hib (5 vaccines) and their first Influenza vaccine or 6 vaccines at this visit, The total doses received now is 21 doses by 6 months of age.

NOTE: Neither of the tools above lists the 3 vaccines—BCG, Hep A or Pneu-23—that are used in some regions.

Contents of Immunizing Agents Available for Use in Canada

NOTE: Product monographs give much more detailed information for contents of vaccines than the above link, including in most cases amounts of mercury and aluminum, fetal cell lines, etc. If you don’t find details you are looking for just search for “product monograph + vaccine trade name + country”. Australia and the USA both have more detailed information in their manufacturer monographs than found in Canadian manufacturer monographs.

The Globe and Mail

“Ten of Canada’s largest pharmaceutical companies together spent at least $48.3-million on payments to physicians and health-care organizations last year, according to figures the drug makers voluntarily divulged on Tuesday.

The disclosures provided a peek into how Big Pharma compensates this country’s physicians for consulting, delivering speeches, sitting on advisory panels and travelling to international medical conferences.

But the companies released so few specifics that some prominent doctors dismissed the revelations before they even took place, calling the disclosures little more than an attempt to keep governments from legislating genuine transparency.

…Only 10 of the 45 members of Innovative Medicines Canada (IMC), the industry association for brand-name drug makers, took part in the voluntary disclosure effort.”

The graphic below is from a CBC article by Kelly Crowe, New pressure for law to force disclosure of doctor-industry ties 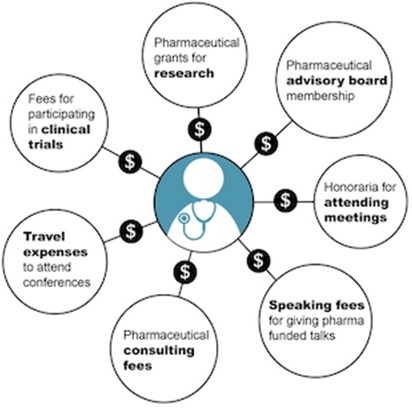 “A Globe and Mail analysis found financial conflicts of interest are commonplace in clinical practice guidelines. As 10 major Canadian pharmaceutical players prepare to release their total payments to physicians, some prominent doctors are dismissing the limited disclosure as meaningless.”

Note 2: Aluminum and Mercury in Vaccines

100 Studies on Aluminum in vaccines—What the Medical Literature Says

“This report by Jeff Prager overviews 100 peer-reviewed published studies that document the impact of injected aluminum and thimerosal on human health.”

This is no dry, wordy report. Rather it is a collection of beautiful slides that contain quotes from the hyperlinked reports on each slide.

The contents of this website are for informational purposes … END_OF_DOCUMENT_TOKEN_TO_BE_REPLACED

In 2013, I contracted the H1N1 strain of flu.  I was deathly … END_OF_DOCUMENT_TOKEN_TO_BE_REPLACED

By Shanna Mi    November 2019 It was a glorious late … END_OF_DOCUMENT_TOKEN_TO_BE_REPLACED

July 2002 Today is my daughter's sweet 16th birthday but … END_OF_DOCUMENT_TOKEN_TO_BE_REPLACED

The Evidence Does Not Support Masking - postcard front … END_OF_DOCUMENT_TOKEN_TO_BE_REPLACED